Just from a little reading on the Internet anyone can tell these clutches don’t last. Just Google it and you’ll see lots of early failures that the dealer will always blames on driving habits.

My customer had went to the dealer and they estimated a replacement clutch at $1400. He said he bought the 2005 Mini Cooper 1.6L for its “go-kart” like handling, but he was upset because it didn’t have “go-kart” maintenance costs. It was more like BMW or Mercedes costs. This clutch was slipping badly! I could barely make it around the block. The trip from the dealer to me was almost too much for it. 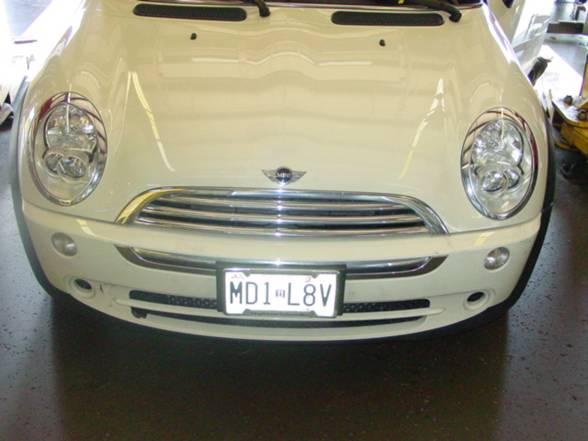 Clutch work on a 05 Mini is a little intimidating to the DIY’er due to….

Despite high dealer cost and intimidating factors I can do these clutches for $600 plus parts (S models and others more). Contact me through email if your interested in me doing this for you. There are many clutch options from OEM to spendy performance clutches. Research what you need taking into account your driving habits and your tolerance of the risk of repeat failure, and we can discuss what parts to get. While this page isn’t meant to be a complete “how-to” it could help the DIYer in familiarizing himself with the basic processes necessary and to remove the intimidating factors associated with clutch work.

Intimidating factor #1: When you open the hood, you can’t even see the trans

Fortunately in order to access the trans you only need to remove the breather and battery box. Any novice can accomplish these tasks. Once they are out you can access the top bell bolts, the mount and the shifter cables and other associated “stuff”. 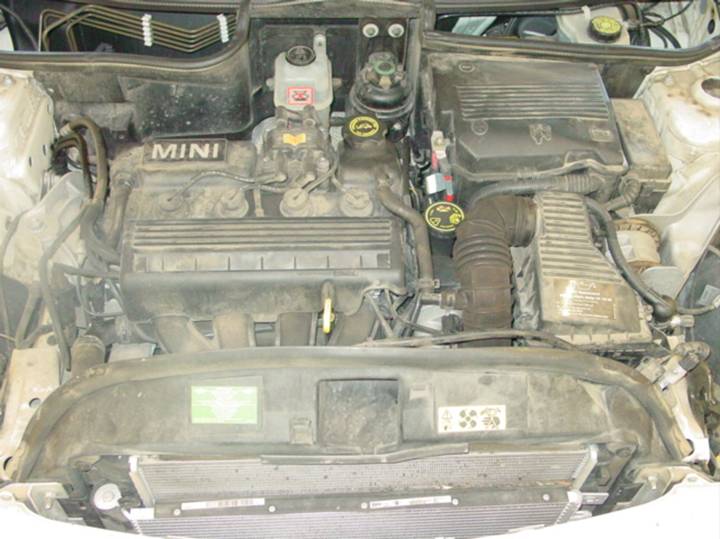 Although it looks like your taking off the whole front of the car, it’s just a few screws. 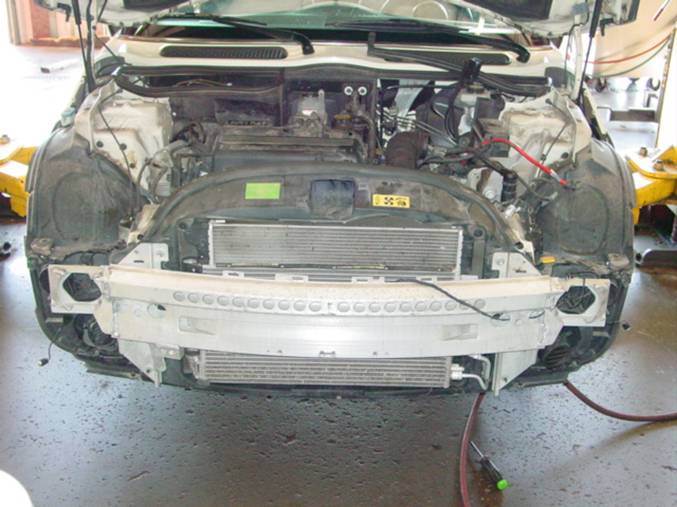 After you get the bumper cover off you take of the bumper. 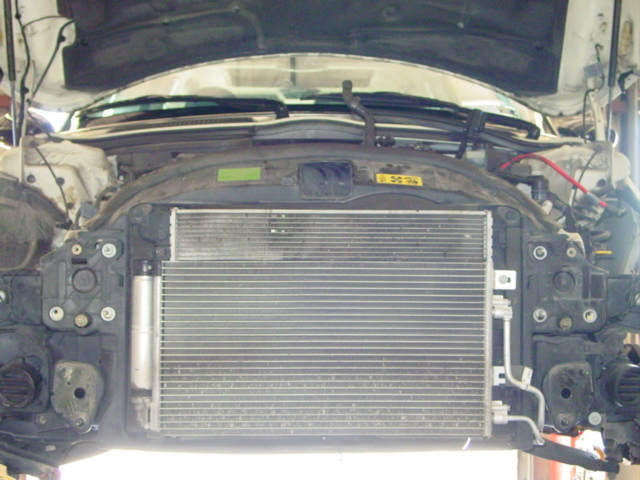 Somewhere in here you should remove the inner fender liner. 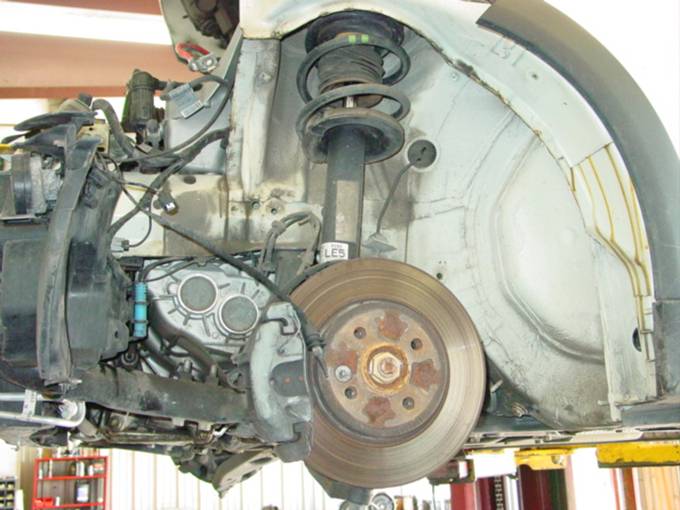 Engine hangars are everywhere. Cheap ones from china, nice ones from snap on, homemade steel ones. Lots of folks make their own with 4×4’s or 6×6’s. I would suggest whatever you do make sure it’s safe. On this one since we were on a lift we just put a “lift style” jack-stand under the pan with a 2×4 to protect the pan. If your doing this on jack-stands you could use a jack-stand under the engine but that makes it difficult to lower the engine just enough. A hangar is the preferred way.

If you are using support from underneath like this, then don’t take the trans mount out until you have the sub-frame removed. 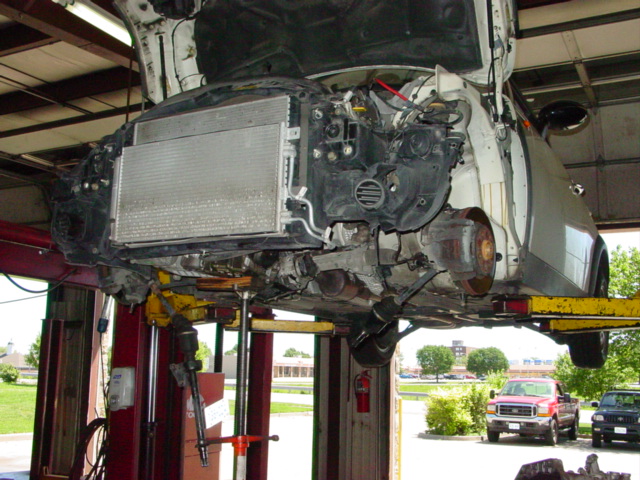 Shop manual says to use Special Tool Number “xyz” to hang the motor, but it’s not really necessary, a chain works just fine. Shop manual also says only to lower the trans 40 MM.  Which is fine, but they scare you to death saying it’ll damage exhaust, hoses, ect. if you lower it more.  Here’s what I did: only lower it far enough for the trans to clear the body as you move it away from the engine.

Oh ya, there’s a lot holding it on.

There’s even some “reverse Torx” bolts. 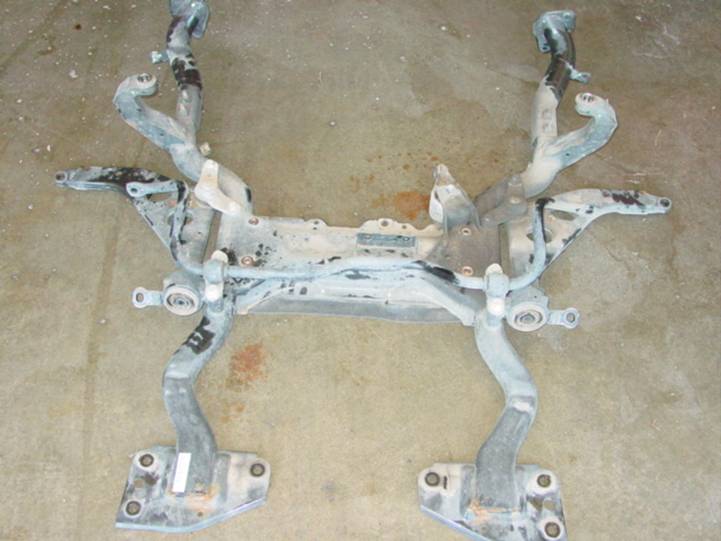 There are 4 reverse Torx on the rack and pinion.  Here’s a pic of two of them. 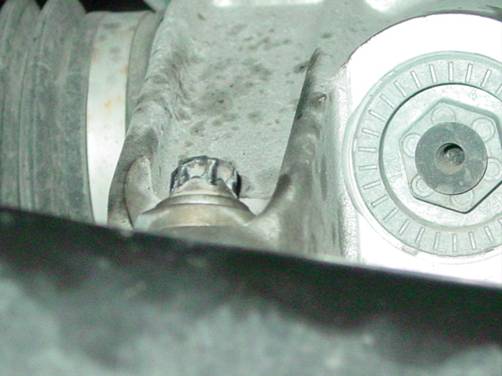 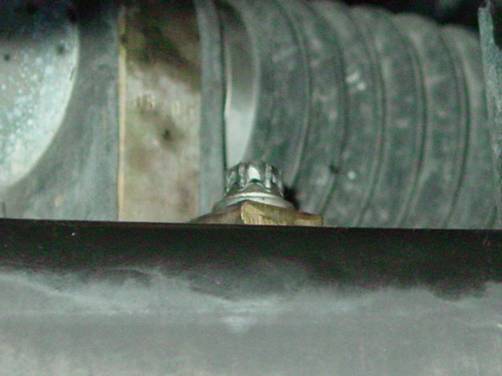 Here’s the socket you’ll need. The size is E12. These are available in a small set at your Friendly Local Auto Parts store. 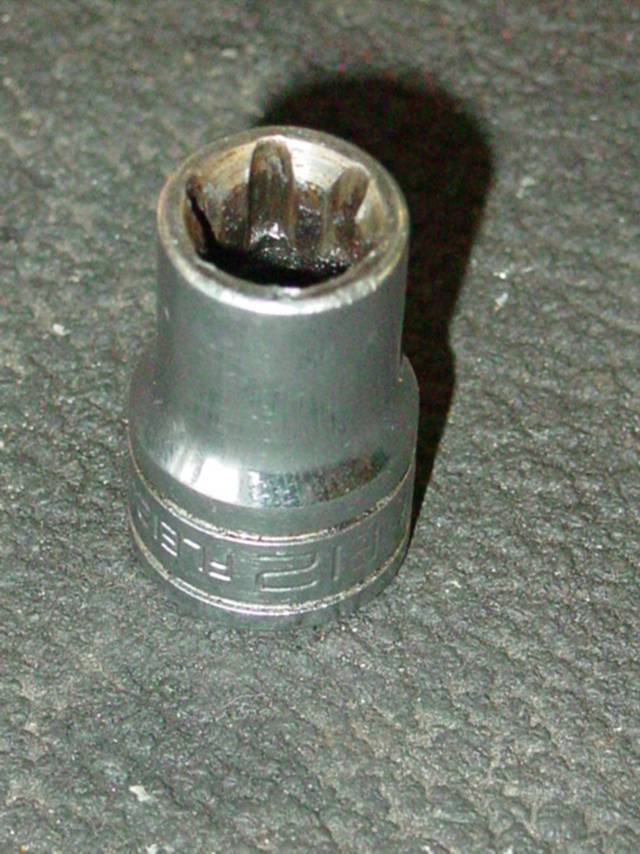 Here’s the shot with the trans out of the car. 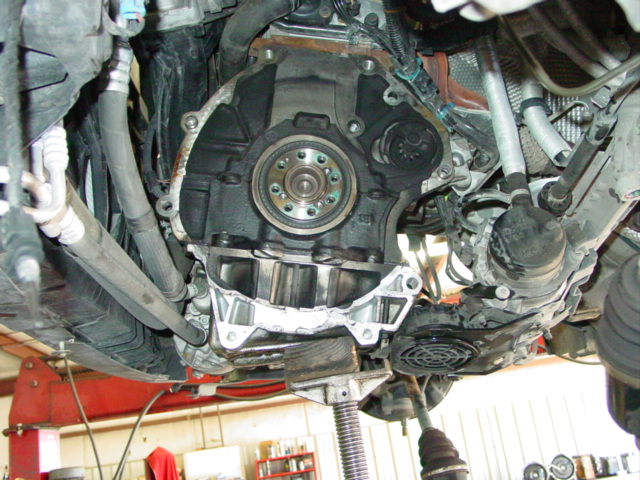 Trans out on jack. It’s a light trans, so if you don’t have a trans jack, just lift it out with the help of a buddy.

Honestly though, it’s a go-kart trans! If you’re a big guy you could lift it out by yourself. But that wouldn’t be safe, would it?

Here, we found the problem with our customer’s car. Its got a “go-kart” clutch in it! Very burnt clutch disk and pressure plate. 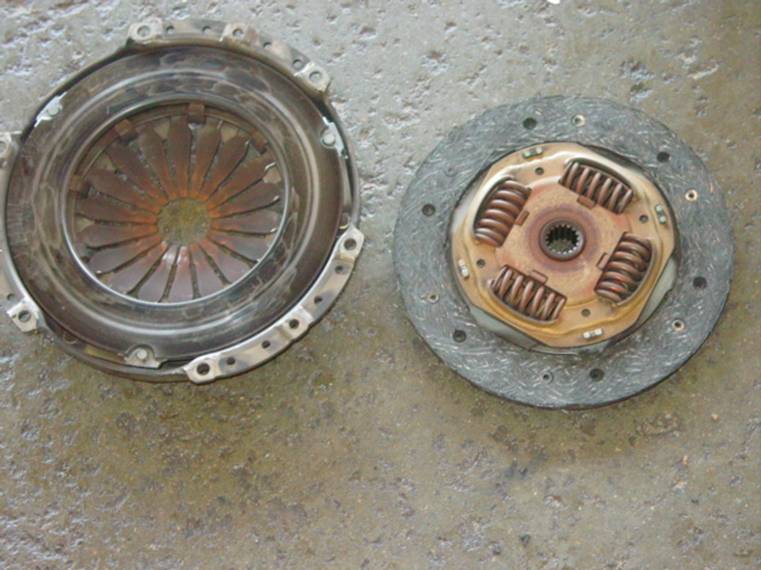 Flywheel has heat cracks and wear. Resurfacing is a must! 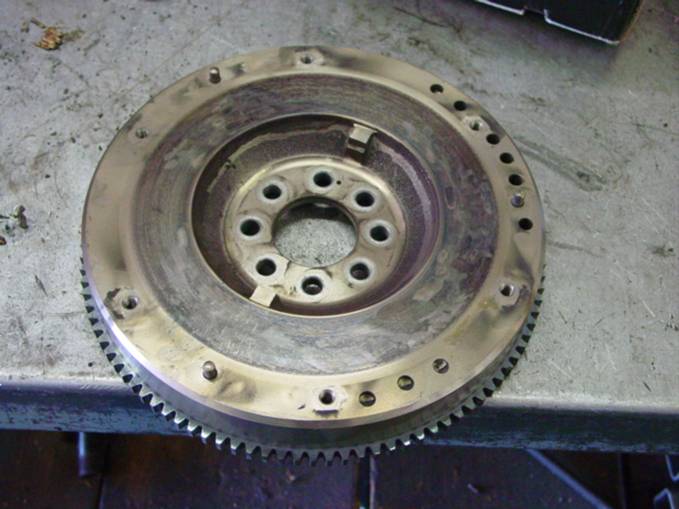 Flywheel to crank bolts pass all the way through into the oil jacket. Don’t be surprised when a little oil comes out of them. Don’t misinterpret this as a rear main seal leak. 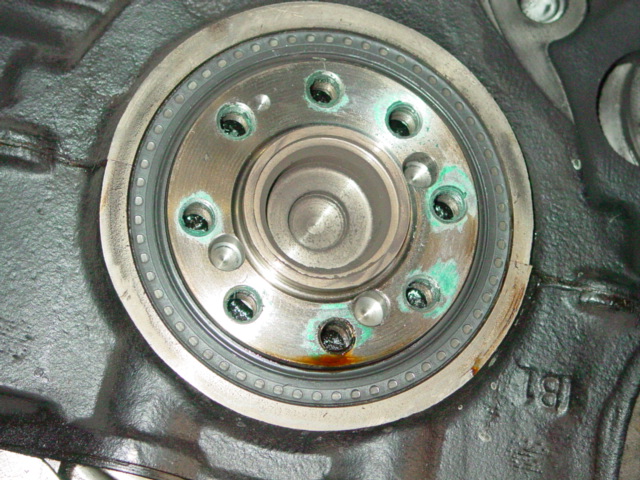 This customer went with a OEM SACHS clutch. Its not unusual but its funny when you open a Sachs box and find a valeo clutch in it.

Luk, Valeo and Sachs are all OEM suppliers. 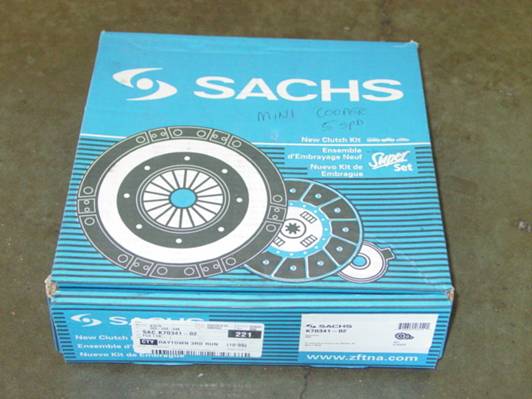 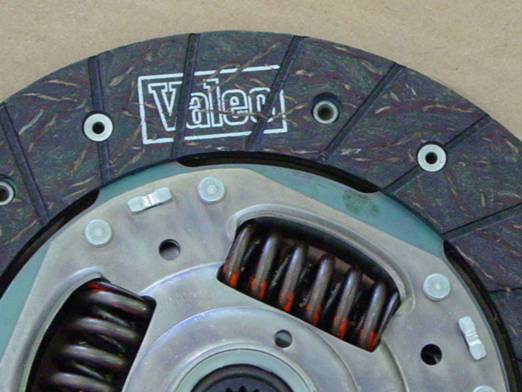 Be sure to pull the fork and put a little grease on the pivot point. 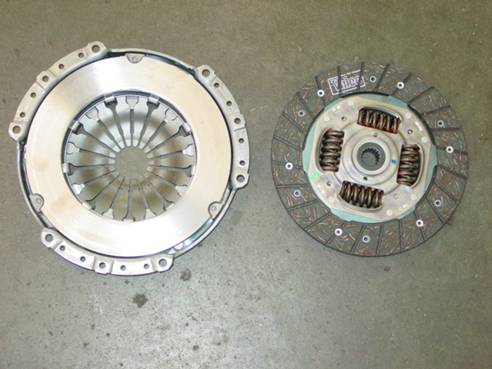 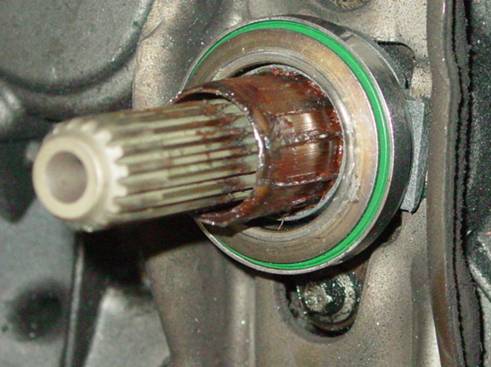 I forgot to get a pic of the flywheel after resurfacing. When I get one later I’ll insert it here. All-in-all it was a pleasant experience working on this car. There is no way this job is worth the cost the dealer was wanting! The best part of the job on a neat car like this is the test drive. I’m officially a Mini-Cooper fan!