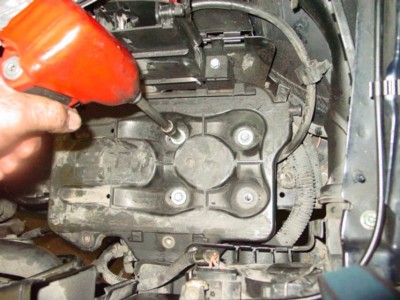 Then take PS line bracket and trans wire harness bracket off Mount bracket bolt stud. Pay attention to routing of wires and the wiring bracket goes below the PS line bracket. This must be assembled the correct way as you go back together to make it right. 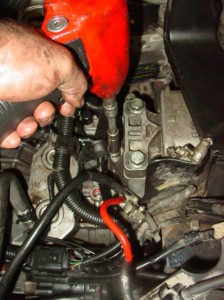 Unplug the following in this pic.

I also remove the multifunction switch from the trans, because once I broke one while removing the trans it because it brushed against the car and broke it. 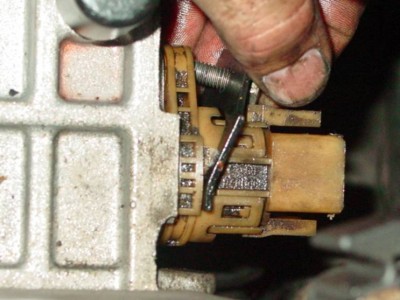 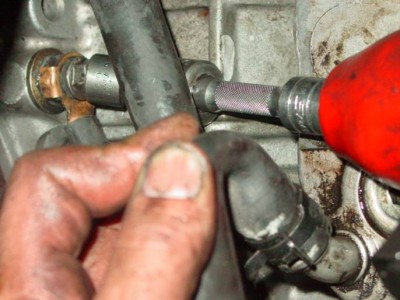 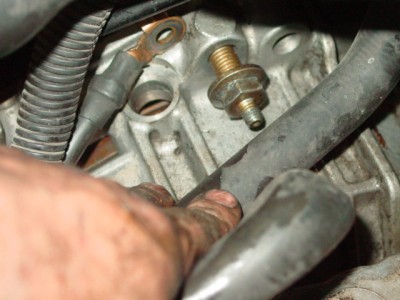 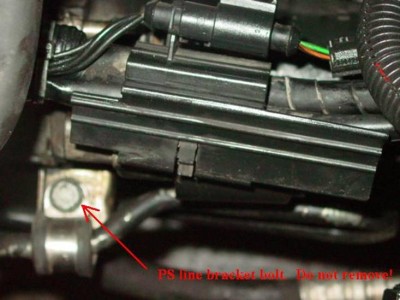 Here’s what it looks at when the harness carrier is pushed aside. 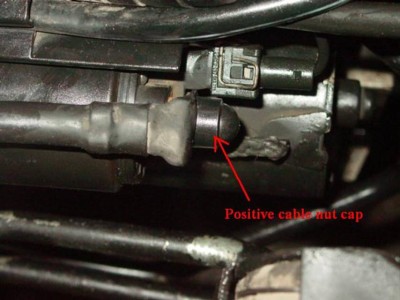 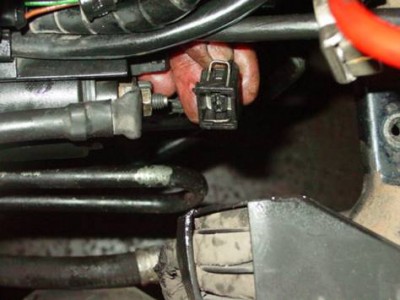 Then remove the starter cable nut and then take the cable off and fold it into the battery tray area. 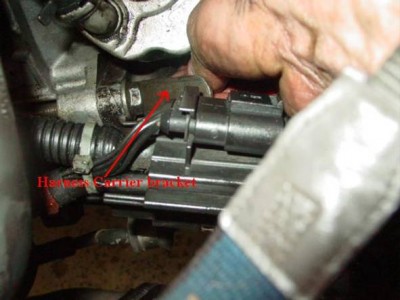 Remove the nut off then remove the top starter bolt. You can do this from the top with a ratchet, or from the bottom with a impact and a swivel, after removing the belly pan, splash guard and wheel.
Remove the cooler and wedge it up out of your way. 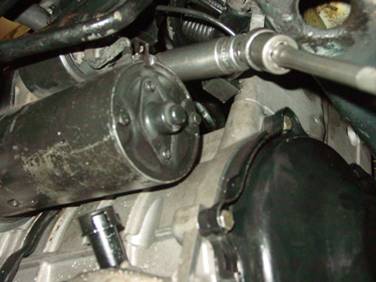 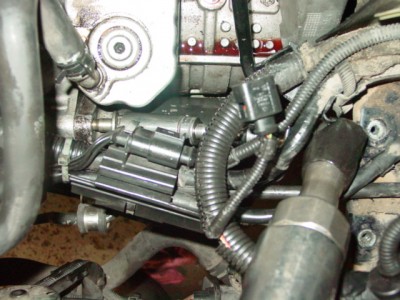 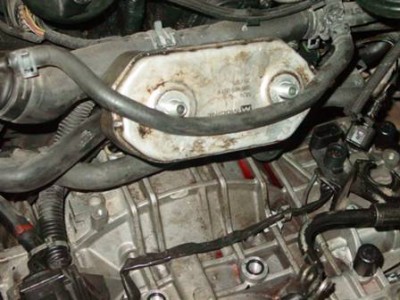 Don’t remove the mount bolts at this point. You want to keep the engine/trans supported by the mount as long as possible. Now jack up the car and remove the front wheels. Be sure to support the car safely with jack stands and I would suggest putting the wheels under the car, as a secondary safety. Remove the belly pan and left side splash cover. 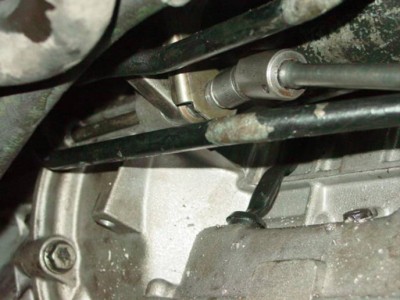 Later in the process you’ll be pulling the down pipe off the exhaust manifold or turbo so first thing you should do after supporting the car with jack stands is to spray the flange bolts down with PB Blaster or some other penetrating lube because you don’t want the studs to break off.

Note: it’s entirely possible to remove and reinstall the entire transmission without removing the axles or ball joints. But without at least one side out of the way it’s difficult to work around it. I do this to make it easier.

Here’s a pic removing the LS axle bolts with the XZN (triple spline) tool. After you remove one rotate the right side tire to get access to the next one. If I was doing this on jackstands I would use my foot to turn the tire while working on the left side. 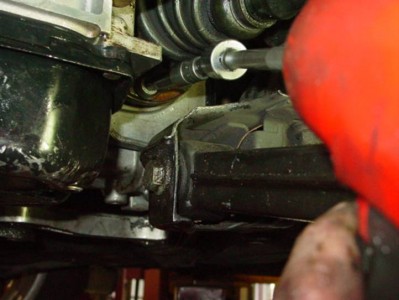 I usually take the bottom bolt out of the Left sway bar link. This allows you to fold the axle out of the way, behind the A-arm. You could just remove the axle, but then you’d have to have the 30mm 12 point axle socket. 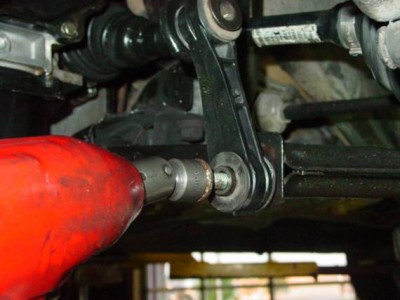 Axle moved behind the A-arm. Note: it’s entirely possible to remove and re-install the entire transmission without removing the axles or ball joints. But without at least one side out of the way it’s difficult to work around it. I do this to make it easier. 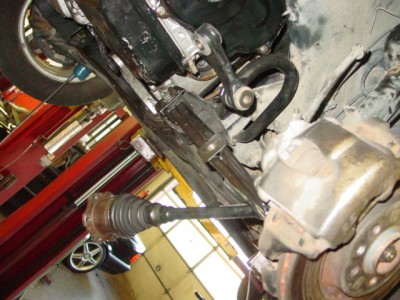 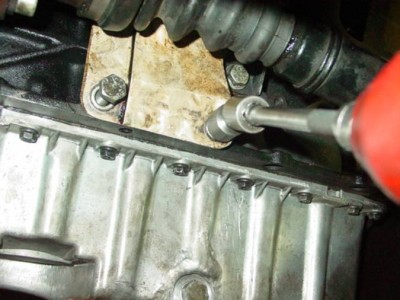 Then take the XZN bolts out of the right axle. Leave the rear bell housing bolt alone. It will hold the trans in place till last. 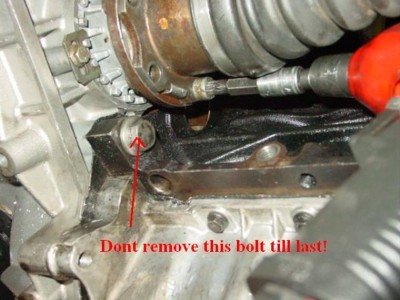 To see the torque converter bolts while I work there I like to put a light here near the RS A-Arm. 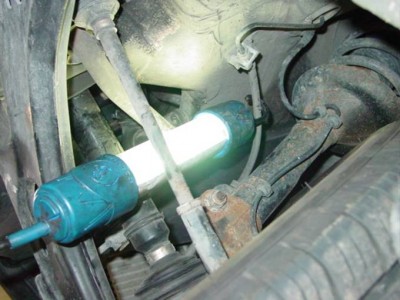 Up behind the right axle stub there is a small round plastic cover. Remove the cover then use a 15 mm to remove the 3 torque converter bolts. 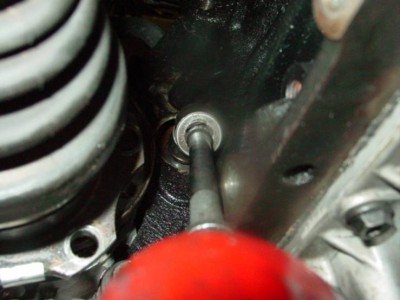 To turn the engine over to access the toque converter nuts, use a 19mm 12 point shallow socket on the crank pulley. If you went out of order and pulled the mount and the motor is lower than its supposed to be then you won’t be able to fit the ratchet in there without raising the motor. 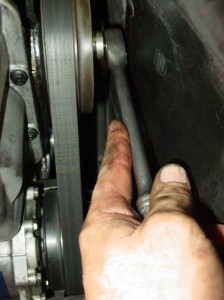 At some point in here you need to remove the pendulum mount. There are 2 bolts going into the “K-member” and 2 going into the trans. These are stretch bolts and should be replaced on reassembly. 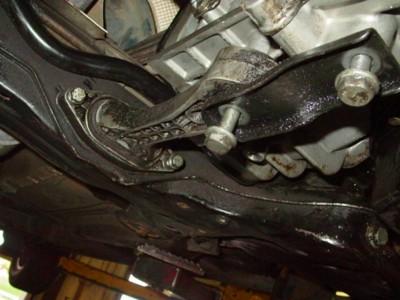 There are 3 bolts that bolt the bell housing to the engine oil pan. The one in this picture is under the pendulum mount. Then remove the other in this picture to the left of the one being removed. 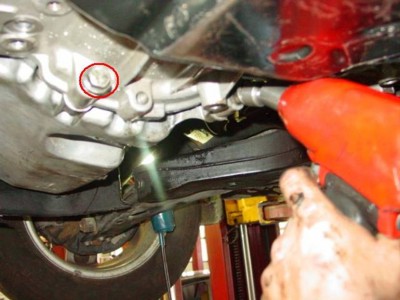 Here’s the third bell housing to engine oil pan. Make sure that the rear bottom bell bolt is still in place and tight. You don’t want the trans falling out on you. 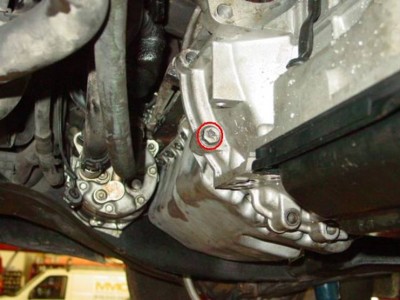 At this point you’ll need to support the motor. On the lift I just put a stand under the oil pan but if you working on jack stands its best to use and engine hanger. Then pull the 2 mount bolts in this pic. 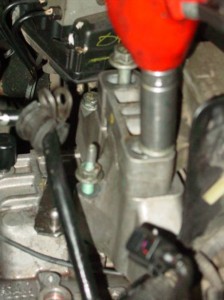 The remove the 3 mount bracket to trans bolts, and pull the mount out the top.

I don’t have a pic but you’ll need to remove the down pipe to turbo or Exhaust manifold nuts. This is to allow movement in the engine as it hangs. The engine must move forward give the trans clearance past the “k-member” or else you’ll have a real difficult time getting the trans down and out.

Finally support the trans with a trans jack. Take a ratchet strap and strap the trans down to the jack to make sure it doesn’t fall on you. 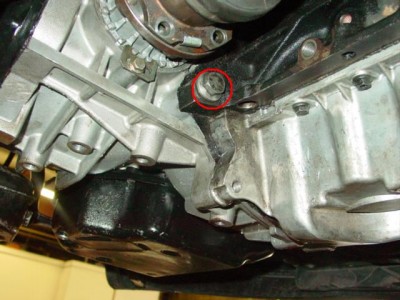 Make sure there are no cracks in the flywheel, or major chips in the teeth. Check or replace the engine rear main seal. Make sure both engine to trans alignment dowels are in place. Note: add pic later. If they are not then your converter hub may wear out the bushing causing pump fail or front seal leak.

If you’re replacing the trans be sure to use the cooler off of the new trans. The old cooler could be contaminated our clogged from clutch material or metal from the failing trans, and you don’t want that causing problems with the new trans.

For filling see the 01m fluid and filter change information.