Customer had been driving and every once in awhile the car wouldn’t start. But, when they brought the car in it was running well and never failed to start. Customer was hoping that it was caused from the crank sensor that we replaced the year before for a similar no-start issue.

We scanned the computer system and got the following codes. 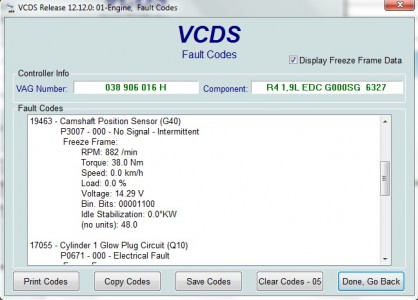 I knew from previous experience that a cam sensor code won’t cause a no start. It usually causes “long crank” . I wanted to ignore that code as well, but I wanted to confirm this. I took a look at the torsion value in field 4-2 in the measuring blocks. Here’s the torsion value:

I knew from another car that if the cam sensor isn’t working, you won’t get a torsion value, as the computer has nothing to calculate the torsion value from.

I wanted to confirm that a cam sensor problem wouldn’t cause the no-start, so I unplugged it.

The car started up and ran fine, so I was pretty confidant that the cam sensor code wasn’t causing the no start problem.

With the cam sensor not working, the computer can’t calculate torsion value, so it shows 0.0. Not to be confused with torsion value being set to 0.0

Which direction to go? I didn’t believe codes were helping. I didn’t know why those codes were in there or if they were causing problems or not, but I wanted to fix the no start problem, not fix codes that weren’t causing the no start. The customer was really wanting a warranty (free) repair on the crank sensor anyway, and I wanted to help them if that was the case, so I took a look at the crank sensor signal with a scope.

Here’s a picture of my laptop based oscilloscope:

While scoping the crank sensor, I put the cam sensor on another channel just cuz it was easy. Here’s what it looked like:

The crank sensor patter looked really nice, so I didn’t think this was the problem. I drove and drove the car trying to duplicate the problem with no luck. I really didn’t want it to quit anyway because I was concerned that I would have to tow it back to the shop. By this time I had a ton of time invested, and the customer was needing the car so I just ordered a crank sensor and warrantied it out for them. That’s what they were wanting anyway. Of course a couple days later the car wouldn’t start again, but this time it was consistent. They towed it in and I hopped in and cranked and it wouldn’t start. Really quick I reached around, folded up the back seat and the carpet that covers the fuel pump and put my hand on the fuel pump cover and then turned the key on. You should be able to hear and feel the fuel pump running. I heard and felt nothing. Finally we had some direction here. I tried hammering on the tank to “rattle” the fuel pump into working but it wouldn’t make the car run.

A good way to check a fuel pump is by scoping the amp draw. Here’s how I hooked my amp probe to the fuel pump. 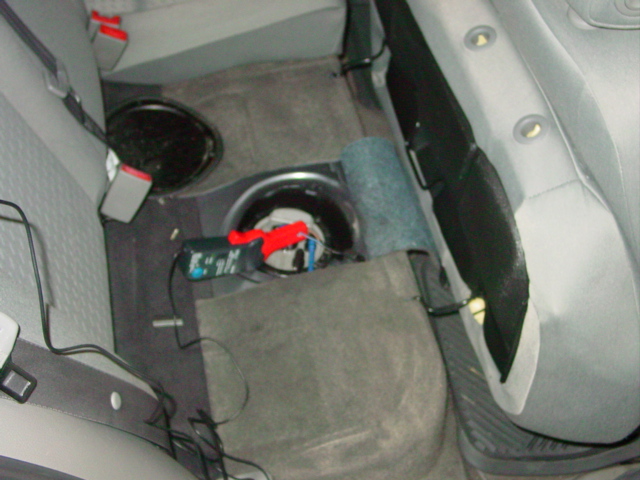 And a close up of the amp clamp hooked to the fuel pump wire. 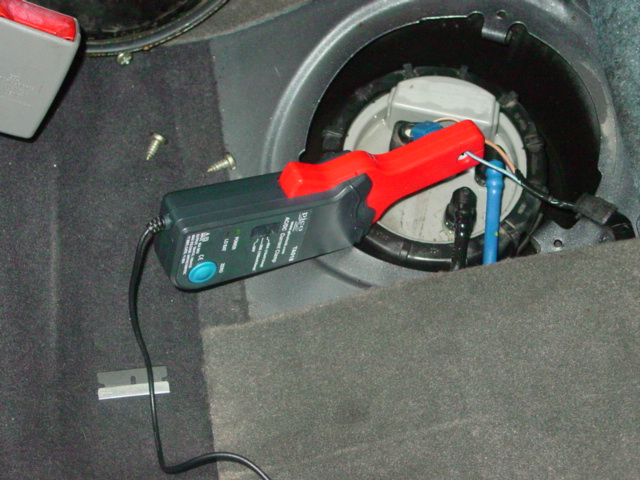 By the time I got the scope on it the fuel pump would “run” but the car still wouldn’t start. Here’s the pattern I got on the scope with this fuel pump. I put the cursor on the “average top” to show that if you measured amperage with a meter you might think it was OK. Fuel pump amp draw patterns on a scope should show a nice consistent waveform with almost perfect humps right at the normal amp draw of the pump. Obviously, this isn’t right.

I wanted to be sure this would fix the car as I had read that some of these cars would run with the fuel pump in the tank not working as it has a “combination pump” on the back of the head. So I substituted a fuel source. This is common procedure on diesel. Here’s my super cheap substitute fuel source. 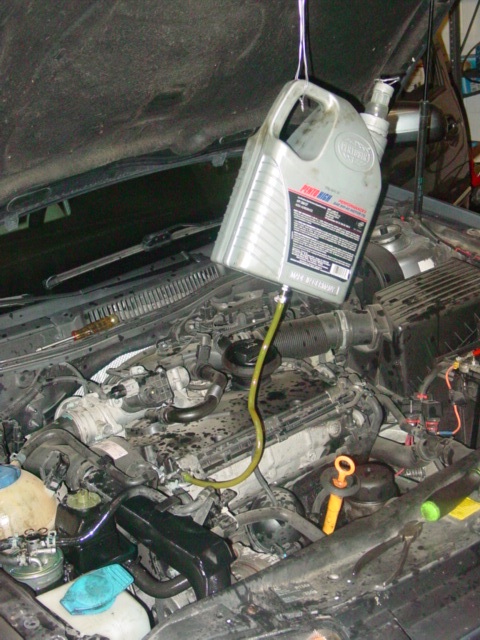 The car started right up and ran fine with substitute fuel source. With the substitute fuel source I had the fuel line disconnected from the fuel filter, and at this point the pump would make some noise like it was running even though the car wouldn’t start. So during the substitute fuel check, in case the fuel pump was pumping a small amount of fuel I unplugged the fuel pump. But you can see in the picture above that fuel came out anyway and made a mess. I was inside the car and didn’t see it happen but I assume the “return” coming back from the injectors sprayed fuel out of the filter. So if you do this test, you might want to plug this off and hopefully that return fuel will go back to the tank.

Since we know the car will run on the substitute fuel, I think we now know a fuel pump will fix this issue.

Here is the amp draw pattern on the scope after replacing the fuel pump: 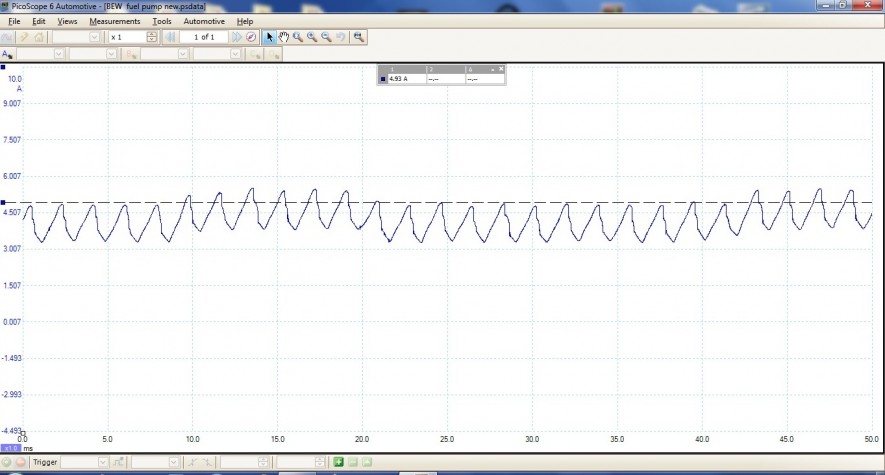