A customer stopped in as he was referred from a nearby shop that doesn’t work on Vw’s.   He had several issues, but this article is addressing the engine misfire and related trouble codes.

Here’s the trouble code list I got from vag-com.

The referring shop also reported that there was a Cat efficiency code but it wasn’t in there when I got it.   The auto scan showed the ABS not communicating with vagcom, probably relating to the 18057 code , and the instrument cluster also reported a trouble code relating to communication with the ABS system.  This ABS problem may be the subject of a later article.

The engine had a definiate misfire that was present at idle and it would jerk and chuggle the car under steady accel with light load.  This is what the misfire counter showed.  Misfire counters are shown in measuring blocks 15 and 16.  Notice cylinders 2 and 5 are missing constantly. 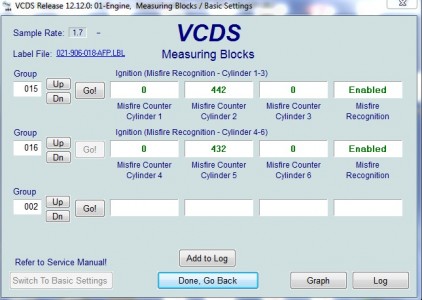 Here is the coil and cylinder layout. 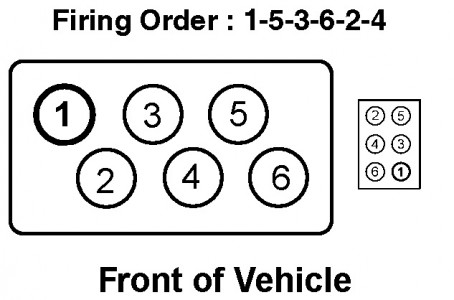 Since cyl 2 and 5 share a coil, and we we have definite misfires there,  it would probably be a safe assumption that the coil is  bad  causing the issue.   We could guess it needed a coil at this point but are we really sure?  Maybe we should do some more checks to find out.

Here’ is the wiring diagram for this coil.

I cropped this to save space.  The BRN wire is clear enough, its a ground, when I traced the wires I found that BLK/VIO was powered by a fuse, and the other three went to the ECM.  But that isn’t enough info to really know anything.  I reverse engineered the coil and made the following diagram to understand it better before performing more checks. 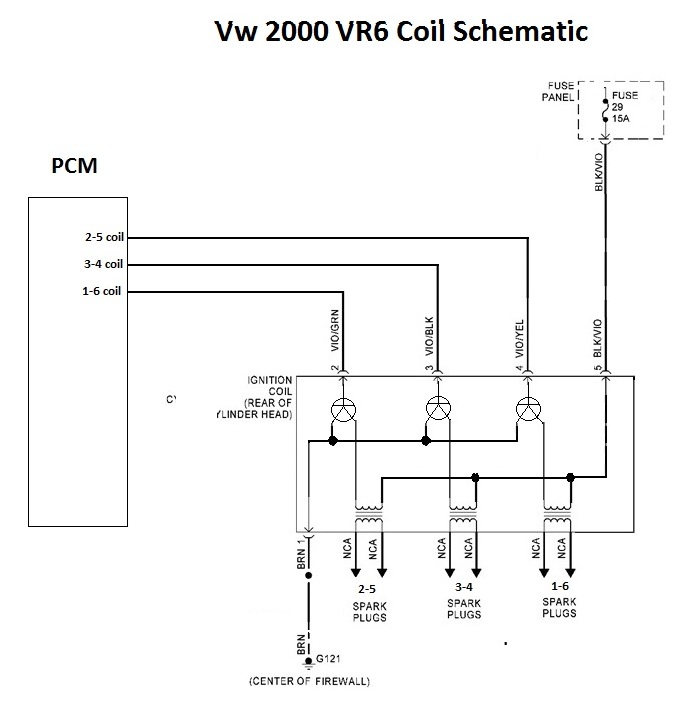 So at this point I know I have a waste spark system, I know which wires provide control for which cylinders, and I know where I can amp clamp to see the current ramping of the coils.

I hook up the scope to 3-4 spark system to see known good 1st before hooking to the suspect 2-5 coil.   Here’s the scope pattern for the 3-4 coil.

Blue trace is 3-4 coil control coming from the computer on the VIO/BLK wire.

You can see that the secondary pattern is there and working, I’m not saying its perfect but its a reasonable pattern and is making spark.  Coil current ramp is normal with no vertical portions.  Blue trace is a nice square wave indicating good control from the computer.

The next pattern is the same coil but is the #4 spark output instead.

Everything is exactly the same because with waste spark system the coil command and amps used are exactly the same on paired cylinders.  The only difference is the output is inverted as this is the negative side of the coil.   So now that we know “good” lets take a look at the coil that we suspected. 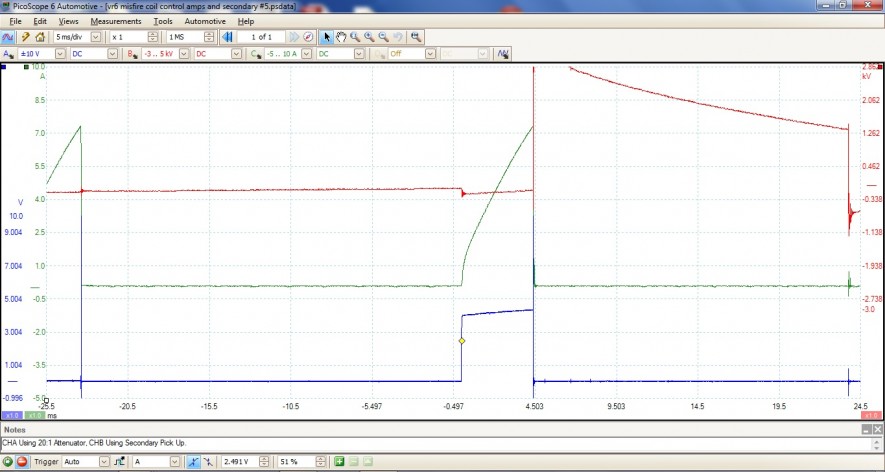 Although I might be able to explain burn time,  KV and slope on a good secondary ignition pattern, I have no idea what is wrong with this pattern.  It definitely isn’t right though.  But we can see that primary current is ok and the computers command is good also.

Here’s the pattern for the #2 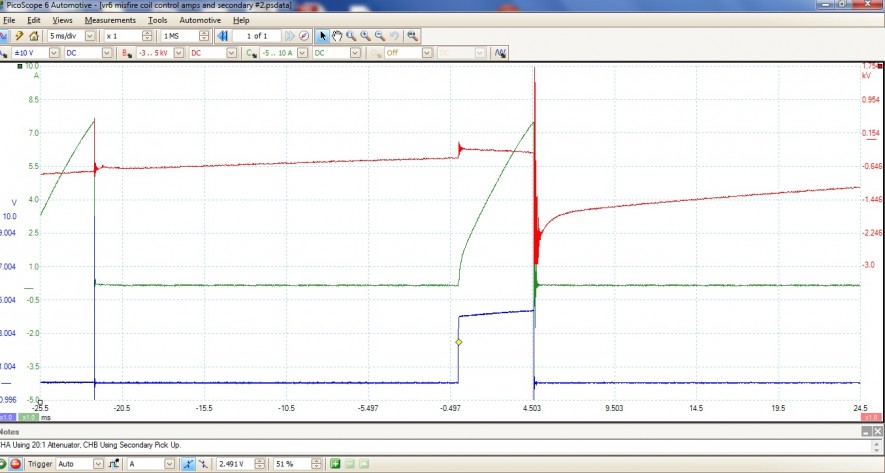 Basically not a good pattern, and its inverse of the cyl 5 pattern, but definitely not right.

I think at this point I’m still pretty sure that putting a coil on it is the right call, but what if we have problems with the wires or plugs?   but I wanted to confirm with “low tech” coil output test.  I put a spark tester on the negative of the battery and I couldn’t get any spark out of the #2 or #5 spark wire. 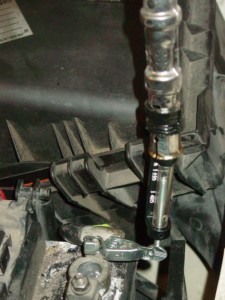 Maybe the problem lies in the wires?  Maybe its just wiring and plugs, and it doesn’t need the coil?  So a coil output test without the spark wire would be in order.

Basically in this test you just watch the spark and guage how far the spark can jump to your test light.  All the “good” cylinders had pretty good jumps.  I could get the spark to jump to the test light even if it was a slight distance away from the coil post.

But the #2 would jump less distance, and the #5 would not jump outside of the post.  If I put the test light deep inside the #5 post  I could hear the spark jumping, but I could never pull the test light out far enough to see it jump from the #2 post.   This was pretty conclusive, that the coil pack was not working on #2 cylinder.

I suggested to the customer at this point that the coil needed replaced and we should change spark wires and plugs at the same time.  He was looking to save some dough so he talked me into just changing the coil and seeing how it worked.   with.

Here’s what we ended up with.   It probably would have been a nice fix if the customer would have let me do the wires and plugs. 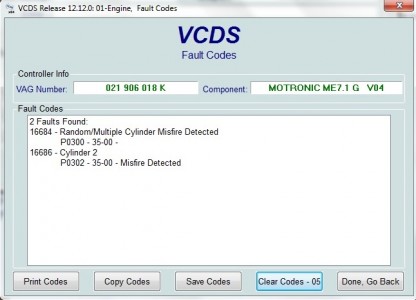 After running a few minutes check engine light came back on with the following codes.

Quick call to the customer saying its not your lucky day, we got his ok to put the wires and plugs on. 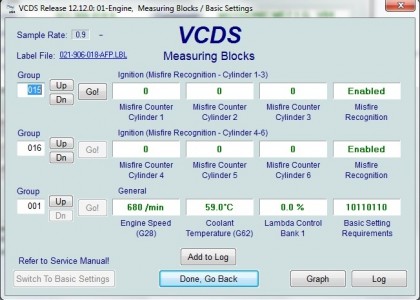 Heres where we ended up.  Misfire counters speak for themselves.
And I wanted to show fuel trim. 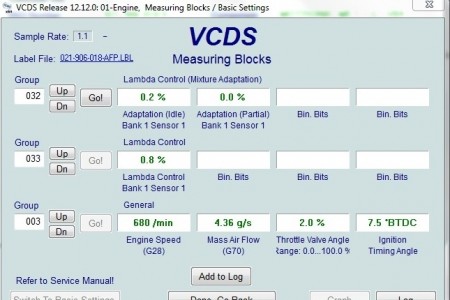 And I graphed lamda over a period of time.

Good fuel control but seems to run a little on the rich side.  Customer had spent all he wanted to so he’s going to come back another day.