This was an easy problem to figure out, but the diagnostic process applies to other problems that are not so easy. So, I thought I would put this info up here. Car was an 06 Jetta Tdi. Customer stated that it suddenly had no power and wouldn’t go over 40-50 mph. She had some work done to it about two weeks prior to this, and it had been working fine till that morning. We got the following code:
000564 – Boost Pressure Regulation
P0234 – 000 – Limit Exceeded (Overboost Condition) – Intermittent

I took a quick test drive and the car had no power. I took a graph of the boost at wide open throttle. In the graph below the green line is the amount of boost that the computer is commanding, and the yellow line is the amount of boost that the Map sensor is measuring. Obviously, this thing is making too much boost. The only reason boost is coming down is because I’m backing out of the throttle. After the computer notices this, it limits fuel to control things so the engine isn’t damaged from too much boost. This “fuel limit” is the lack of power the customer was noticing.

So on any Tdi with a variable geometry turbo to diagnosis an over boost situation, you need to know that the N75 solenoid is able to control vacuum and that the actuator is moving with the vacuum. But with a smart actuator you can check these things from the drivers seat without even raising the hood. Here’s how: 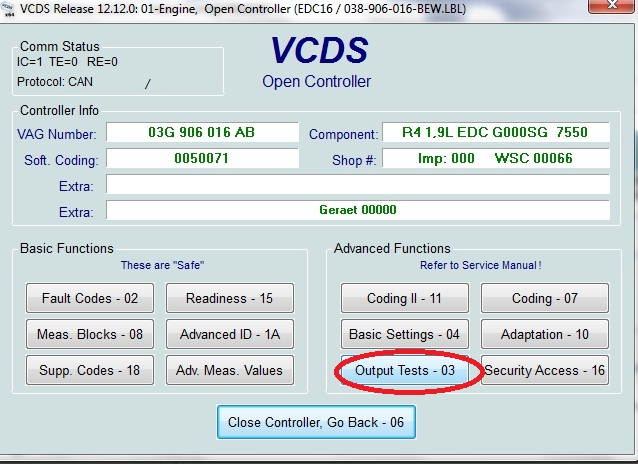 Then, click “sequential output tests” then click “start.” It would be nice if you could do selective output tests, which would simply allow you to go straight to N75 boost solenoid output tests, but the computer on this car doesn’t allow that.

What the computer does during the output test, is it commands the N75 full on, then full off, and continues to cycle on, then off. You can see this command in field 2 (see the following pic NOTE: PIC missing for now.) While this output test is going you can verify that the solenoid is able to control vacuum or you can test that the actuator is moving with the vacuum. Field 4 shows the position that the “smart actuator” is in. Although vag-com labels field 4 as “duty cycle, which you would normally assume is a command of some type, it is actually showing you the position of the turbo actuator as interpreted by the “smart sensor.”

Insert ON pic here. (pic is missing?? Will insert later)

Side note: While trying to get the missing pic from a BEW car, I noticed a difference in the output test, so I made a page to show the difference. Click the following link: n75 output test BEW vs BRM

So, since we see the solenoid on and see the smart actuator near 100%, we know the actuator is in the max boost position. Then when the solenoid is commanded off, you should see field 4 change to near 0%. Take note that it will not be zero exactly and every car will be slightly different. Here’s what we had though on this car, which shows the problem.

2. N75 solenoid could be stuck in the on position allowing vacuum to the N75 all the time.

So now its time to raise the hood. You should always check the easy stuff first like vacuum leaks, etc. But if you see nothing obvious, you should test that the actuator has vacuum during the output test when field 2 says “On” and that the actuator has no vacuum when field 2 says “off”. You could also use a handheld vacuum pump to pump up the actuator and see that it moves either visually or by watching field 4. I didn’t have to go that far on this car because the problem was obvious. 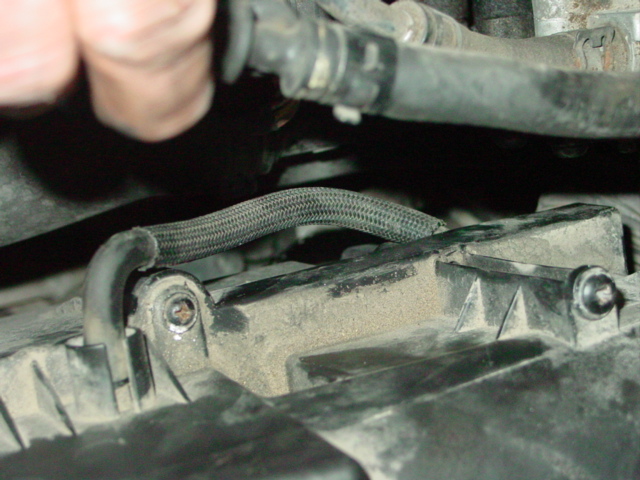 The vent hose from the N75 was pinched in between the two halves of the breather. This must have happened during air filter change when the car was worked on as mentioned. This vent hose is used to vent vacuum when the N75 is commanding zero vacuum to the pod and since it was pinched, vacuum would be held to the actuator regardless of whether the N75 was on or off.

Here was my hint to finding this quickly. Takes a specialist to notice this. (Hint of sarcasm here). 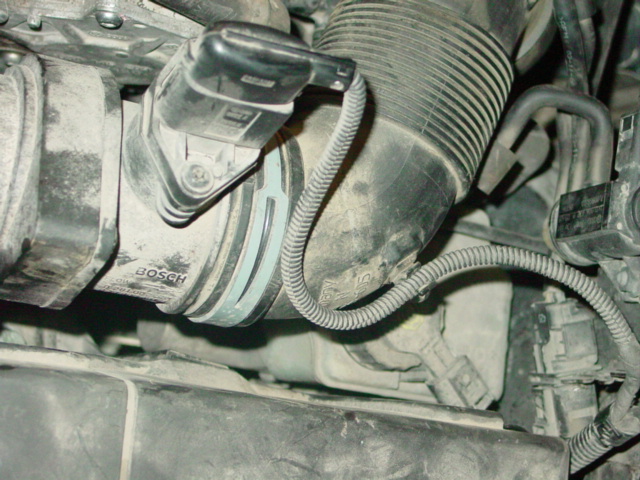 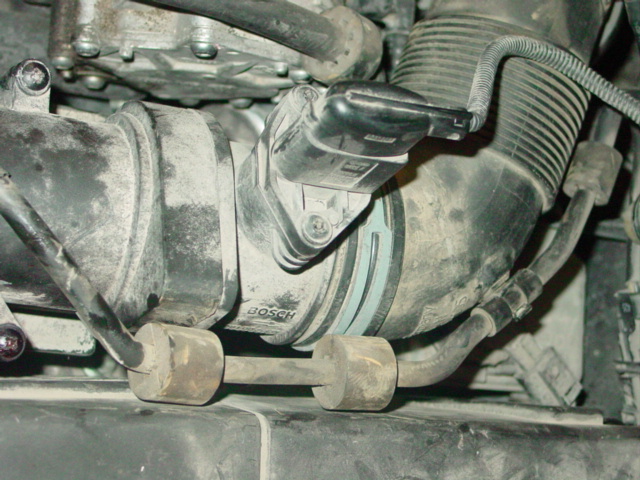 So after I corrected the vacuum hose, I ran the output test to see if the N75 could now move the turbo actuator. Here’s the result.

Now don’t say… “But that isn’t very near zero!”  Point is, that ON, it shows near 100% and OFF, it shows near zero%. 21% is not a problem and not something to worry about. The car learns the high and low point on each ignition cycle and works accordingly.

So I’m pretty sure the problem is corrected at this point and so I go for a quick road test. Car runs great and I take the following graph demonstrating how normal boost should behave. Once again green is commanded boost and yellow is actual boost. Computer raises boost and it “overshoots” command, indicating the turbo is capable of making good boost then boost comes down and “balances” near the green line indicating the computer is able to control boost as the N75 changes vacuum to the vacuum actuator. 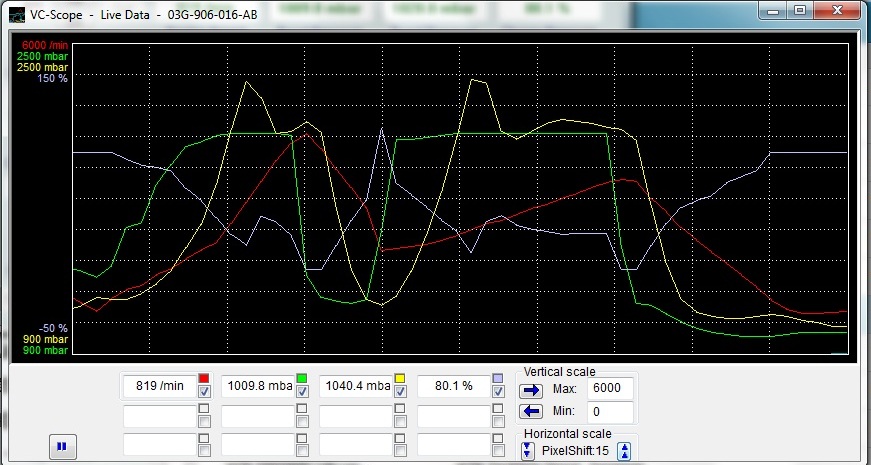